Here's what folks said about this show! 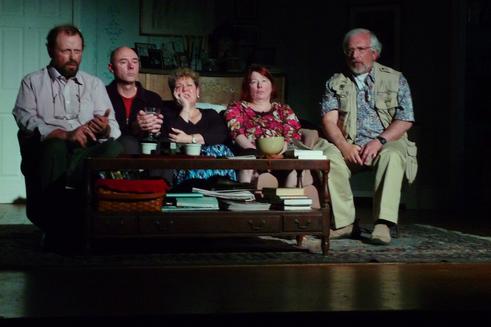 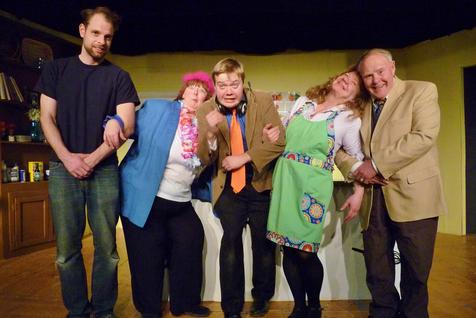 Isobel Lomax and Dolly Biddle are two "mature" cable-access cooking show hostesses who have hated each other for 30 years, ever since Larry Biddle dated one and married the other. When circumstances put them together on a TV show called The Kitchen Witches, the insults are flung harder than the food! Dolly's long-suffering TV-producer son Stephen tries to keep them on track, but as long as Dolly's dressing room is one inch closer to the set than Isobel's, it's a losing battle, and the show becomes a rating smash as Dolly and Isobel top both Martha Stewart and Jerry Springer.

You Don't Own Me from "The First Wives Club"

Turn Back Old Men from "Godspell"

Gary Gagnon, with some help

Anything You Can Do from "Annie Get Your Gun"

Very Special Fund Raising Event
Branch River Theatre will be presenting "Way Off Broadway" November 8,9,10 in Marlborough. It will be produced and directed by Debbie Pickering, Jeffrey Repko, CJ Cummings and Gary Gagnon and will be like the Revivals and Just Desserts of old. We couldn't get Godspell rights this year so this is our alternative, and we are excited to bring the variety show format back. We welcomed singers and performers to help us with skits, our opening number (Spamalot's "You Won't Succeed on Broadway"), our TV Theme medley, and our closing chorus of Guys and Dolls Selections.

Most importantly profits from the show will go to benefit David Hudgik, of Keene, NH.  To learn more about Come and support our cause and BRT and join the fun. This will be Waaaaaaay off Broadway, or A Way off Broadway, or Way Off Broadway (as in, way off center), but as much fun as golfing in a foursome of Jeffrey Repko's! 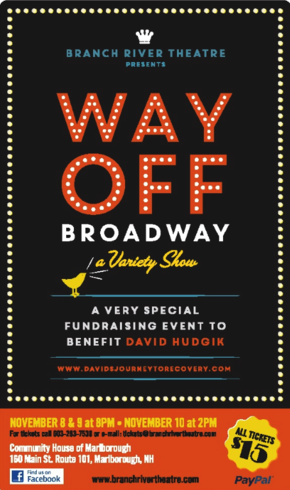 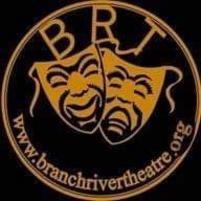 Dear Branch River Theater Company;
Thank you all for a colossally entertaining afternoon. Not only was the play a labyrinth, designed to catch the inattentive in a snare, but your company did it proud, turning in stellar performances of clearly drawn and quite lovable characters. To single out an individual would be to leave out all the brilliance of whomever one didn't mention. Diabolically executed and very, very enjoyable.
Thank you for your consistent quality and your dedication to great theater.
A constant fan, " - Carol J.

"Amazing job to the cast and crew of Olive and Bitter Herbs! You guys were fantastic!" - Kimberley M.

"It was a pleasure! Great show, great cast and **best of all LOTS of laughs.** Congrats to all!" - Alana K.

"Scott you are absolutely hilarious in Olive! I just love to see you perform! Thank you for lifting my spirits! ... What a delightful show. Hilarious! ... Just what I needed... Olive! I love you. What a wonderful show!" - Veda C.

BRT's 2014 summer offering,
Olive and the Bitter Herbs centers around curmudgeonly Olive Fisher, a retired New York actress who suddenly sees a ghost in her mirror. That, though, is the least of her problems. Her radiator's broken, the couple next door stink up her apartment with exotic cheeses, and the highlight of her long career was a sausage commercial in the '80s. Despite that she's not the most popular tenant in the building, her neighbors invite themselves into her life and she finds herself hosting a Passover Seder. But are Olive's guests there to see her, or the mysterious man in her mirror? Olive and the Bitter Herbs is a comedy about connecting to the people in our lives-those with us, and those who have passed on…

Me and My Shadow 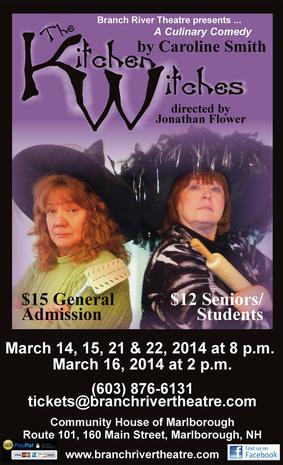 ""Very enjoyable production this afternoon of that Olive and the Bitter Herbs show. Kudos to the whole company! Lovely to see so many of my former students doing such good work. And always a pleasure to see Susie act again. Wendy absolutely nailed it and the gay neighbors were a stitch! Oh yeah and that Eisenstater guy has promise as well." - Daniel P.

Seder show. Seder funny show. Seder VERY funny show. Buy ticket and seder show. It good. Go seder. You vill seder what I mean... : )" ...  "We came expecting to be royally entertained, bowled over, and reduced to helpless tears. We were not disappointed! Congrats on a wonderful show, Madam Director!! : ) ... " The show was a perfect martini because "Olive" was the perfect olive-- fantastic performance, Ms. Almeida!! : ) - Mark A.

"THIS IS A GREAT SHOW --- PEOPLE: make a reservation now as this one will sell out --- funny and sassy and wise and wonderful --- do not miss this one --- many talented people and a great script! You will love it!!!!!!!" -Molly M.

"Fabulous, fun show! What a wonderful job everyone did!" - Michelle G.

Thanks to all involved over $6000 was raised!

"Yes, I did! I grew up not far from Kips Bay, and your performance brought me right back there. It is a really cute story, and the entire cast nailed it! This is great local theater and I recommend it to all." - James M.